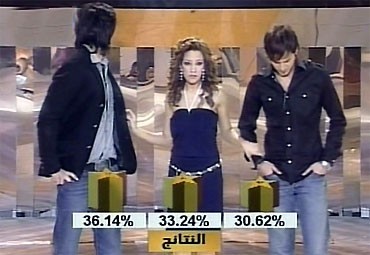 The Eleventh Prime of Star Academy 4

The eleventh prime of Star Academy 4 which took place on Friday 24th of February 2007 was a great prime. Guests of the 11th prime were Lebanese singer Nawal El Zoghby and Star Academy 3 Winner, Joseph Attieh.

The nominees of the eleventh prime were Ahmad Dawood from Kuwait, Amal Lembary from Morocco and Imad Jallouli from Tunisia.

Big Guests and Big Nominees and a great well planned prime made the night an unforgettable one.

Carlo Nakhleh was the Friend of the week. He won a night at the movies with his friends.

The students later sang a great song for the occasion of the National Day of Kuwait.

The top 1 student the eleventh week was Shada Hassoun, who won the opportunity to shoot a TV commercial with MTC. The ad will be aired on the Lebanese Broadcasting Corporation - LBC.

By the end of the Prime the audience saved Ahmad. While the students selected Amal, hence, Imad Jallouli left the Academy on its 11th prime.


Help us improve this page:   Correct or update the The Eleventh Prime of Star Academy 4 page