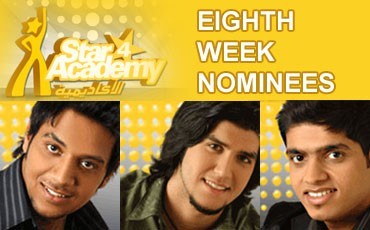 The eighth week nomination of LBC Star Academy 4 were announced:

It is very obvious that this week Abdul Aziz Al Aswad will leave the academy, Ahmad will get the most votes because of his popularity, and Ayoub will be saved by his friends because he is talented.

What I still dont understand is how Ahmad could be a leading student in the top 10, yet get nominated. I really think its just a way in which the program wants to generate more money by putting 2 nominees from Kuwait. or they simply want Abdul Aziz out as soon as possible. Don't you agree with me?

Who do u think should leave the Academy on the 9th Prime on Friday 9nd February 2007.

Help us improve this page:   Correct or update the Eighth Week Nominees of Star Academy 4 page