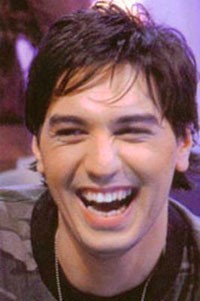 Bruno Tabbal is a 26 year old Lebanese who came to Star Academy 1 to gain as much as he can from the teachers in order in improve his singing and performance. Bruno Tabbal put in words is simply kind, cute, handsome and witty.

During his stay at the Academy, Bruno worked very hard in all the lessons and tried to improve his singing especially the eastern style of singing.

During his stay at the Star Academy Lebanon, Bruno Tabbal showed great talents and a friendly personality.

Bruno was classy and mature. His will to help everyone around him made him a true Gentleman. Bruno was simply the King of the Academy.

Bruno showed an exceptional talent when it came to singing in the English Language. His western singing talent got him to perform in an international concert with the Star Academy.

Bruno was one of the very few who left a very good impression on everybody who watched him in his last prime.

Bruno has the looks, the personality, and one great voice, he hopes to become a worldwide singer.

After Star Academy 1, Bruno Tabbal first appeared with Hiba Mounzer second video clip for her song (keef baddak habibi).
Bruno played the role of the hansome hero who appears towards the end of the clip riding a red convertible.

The name of Bruno Tabbal appeared a year later as the director of the first videoclip and appearance of Soumaya one of the candidates of Star Academy 1 who left early in the Show.

Way to go Bruno.. from all the staff of Lebanon Links we wish you all the luck, and we all support you!

Help us improve this page:   Correct or update the Bruno Tabbal page