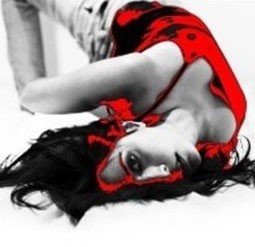 Do you remember that breathtaking long haired oriental beauty from the Lebanese underground trip-hop cult band Soap Kills? Well Yasmine Hamdan is back with a new project: a collaboration with internationally acclaimed Mirwais Ahmadzai under the name of Y.A.S., with an Arabic avant-garde music that will blow up the electro-pop scene!

Born to an Afghan father, Mirwais is a Paris-based record producer and songwriter, rated among the five greatest contemporary producers alongside Timbaland and Dr. Dre. He was behind the return of the Queen of Pop Madonna to the top of the charts, as a result of his contributions on Music (2000), American Life (2003) and Confessions on a Dance Floor (2005).
For those who might not know, Soap Kills was an electro-duo formed in 1998 by Zeid Hamdan and Yasmine Hamdan. The group performed fusion music that drew some of its inspiration from classical Arabic songs, which were then given a psychedelic coating. Yasmine's sensuous voice wonderfully adhered to Zeid's minimalist electro moods to bring us intriguing creations such as "Violence" and "I'm Lost". One of their most interesting music videos at the time featured Yasmine in a ghostlike white dress wandering hopelessly in post-apocalyptic Beirut, placing traditional soap balls (like the ones you would still find today in Khan El Saboun in Tripoli). We learn in the end from the mega explosion that the soaps were some sort of lethal mini nuclear bombs. Unfortunately, this Lebanese oddity ceased in 2005, when the band split.

Back to Y.A.S. The fruit of this Franco-Libano-Afghan union is one of the most anticipated projects in years called ARABOLOGY, which will be out in France on June 8, 2009. All songs bear Yasmine's intense sensual voice and Mirwais' electronic French Touch, to form what is being referred to as a the first international Electro project to place the Arabic language at the centre of pop culture!
Y.A.S. is the response to the kitsch Arabic World Music that has suddenly captured the attention of the West with the consecutive wars waged on Afghanistan, Iraq, Lebanon and Palestine and their extensive media coverage. It ditches exoticism for a more futuristic transgressive sound, where Arabic discovers a new ultra-modern youth, floating in a cocktail of 80's electro-pop sounds and unearthly modern synth club beats. Y.A.S. definitely shatters the stereotypical image of Arabs and ends the lack of a true cultural representation coming from the youth of the Middle East eager to mix with modernity and western culture, while conserving a real Arab identity.

Y.A.S.'s first video GET IT RIGHT was directed by Stephane Sednaoui.

Well basically, put Ting Tings, Natacha Atlas, and Madonna into a shaker for a few minutes then voila, you get Y.A.S. As the French would say: ca dechire!

The album has obvious traces of Mirwais' work with Madonna, but a l'orientale. The Arabic lyrics flow from meaningless enumeration in Arabic, swearing or graphic depictions (Kalb or He touched my breast), to strong yet blurred political and social statements, all gathered in a quirky package and bathing in fun Electronica. There is an American on my land, a Chinese in the Litani river, a Syrian in my closet, an Italian in my dress and an Afghan in my bag???!!! How fabulous is that?! What more can you ask for, when today's lyrics are mere repetitions of a few boring words that have been used and abused over and over again. Yasmine's voice sometimes takes on a sensual "call girl on the phone"-like aspect, sometimes a more punk nature and other times a soothing oriental deep breathing as if singing sacred chants from the dunes of the desert.

"Get it right", is a bit Ting Ti-esque. Perhaps Ricky Martin has taught the world how to count in Spanish, well Yasmine will teach them how it's done the Arabian way ;)

Our coup de Coeur is definitely "Yaspop", with its witty lyrics trenched with Yasmine's robotic voice.It somewhat denounces occupation and the presence of foreign secret agents, married with the idea of globalization and a capitalist economy. In an interview, Mirwais and Yasmine refused to meddle in current political issues and strongly warned the media from trying to force any political sidings upon them, as they are simply producing nice music!

"Coit me" is reminiscent of Soap Kills and is actually an enhanced version of one of their earlier work. We always felt Soap Kills had a lot to offer but their beautiful melodies didn't reach their full potential due to the limited musical arrangements and sounds which can only be achieved in a high-tech studio with world renowned professionals. Sometimes Yasmine sounded as if she was singing A capella. Well all that is in the past now. So if you miss Soap Kills "Coit me" is for you.

"A Man" is an Arabic version or shall we say travesty of the well known song "Let's call the whole thing off", put in an electronic format. Outrageously hilarious! We learned afterwards that Yasmine insisted on using the word "Banadoura" (tomato in Arabic), pointing out that this is the word Lebanese militias used to ask pedestrians to repeat to dig up what they perceived as members of Palestinian militias (since Palestinians pronounce it differently). Suddenly what seems to be a silly song takes on a whole new meaning!

The album also includes other interesting songs such as "Gamil"(with it's deep oriental spirit), "Oloulou", "Azza", and "Fax".