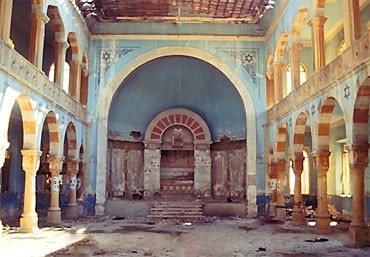 After a relative halt in the constructions and refurbishments in Downtown Beirut, due to the recent Israeli/American aggressions followed by the latest national political strife, the pace seems to be finally picking up, including that of the reconstruction of Beirut's Wadi Bujmil Synagogue or the Maghen Abraham Synagogue of Wadi Abou Jemil Beirut.

The Beirut Souks Project, a modern shopping district, replacing the traditional markets is now taking shape and its expected beauty is very visible. According to Solidere, it will include facilities totalling 100,000 sqms of floor space and 60,000 sqms of pedestrian areas and landscaped squares. We are to expect around 200 shops, an office building, a gold souk and jeweler’s market, an entertainment complex comprising cinemas, restaurants and games arcades, an international department store, and of course an underground 2600 car park which has already been completed. Very
impressive indeed!

A few miles away however, stands a long forgotten and decaying architectural body, in need of urgent attention to wash off its years of suffering and sorrow that characterize most of the ruins located along what was known as the demarcation lines.

The Maghen Abraham Synagogue in Wadi Abou Jemil is probably the last remaining symbol that Lebanon's currently vanishing Jewish community was in fact once fully integrated into Lebanese economic, social, cultural and political life. Actually, when Greater Lebanon was proclaimed in 1920, they were the only Middle Eastern Jewish community to be constitutionally protected!

The Synagogue was built during an era of prosperity, throughout which the Lebanese Jewish community began to flock towards the Wadi Abu Jemil district, making it their cultural, religious, social and economic centre.
In fact, Lebanon was the only Arab state to see its Jewish community increase after the establishment of Israel. Lebanese Jews remained generally opposed to the Zionist movement and their attachment to life in Lebanon as full Lebanese citizens was stronger than their sympathy for Israel.

During The 1958 conflict however, many Jews left for Europe, the U.S. and South America. Again, very few went to Israel. Like most other Lebanese who emigrated, Lebanese Jews remained attached to their homeland.
Following the June Arab-Israeli war and the civil war of 1975, Wadi Abu Jemil was deserted, and the synagogue was closed. Located near the old city centre, it was unfortunately caught between the conflicting factions. But ironically, the synagogue took most of the damage from direct Israeli shell fire during their 1982 invasion of Lebanon.

When later on Solidere was created, Beirut’s City Centre started undergoing a full fledge face lift. The restoration of the synagogue didn’t seem to come up in any of the plans, until a project to build a massive Hariri Mosque in the Martyrs’ Square area took form.
At the time, there was need to acquire more land in the chosen spot. It is believed that Former Prime Minister Rafic Hariri had concocted a deal with the Safra family (one of the most established Jewish banking families in the world), whereby they donated land they owned for the mosque, in exchange for Hariri’s adoption of the Synagogue’s restoration. The anticipated project also included a garden, surrounding the Synagogue, open to downtown strollers. This would have been the icing or the cherry that would crown Rafiq Hariri’s political career and diplomacy, part of his grand self-marketing plan. Through money and influence, he had already managed to import the Saudi ruling style to Lebanon, insuring he would rule forever. Things did not go quite as planned though...

Currently the Mosque is completed, and Rafiq Hariri’s remnants from his assassination (Believed to be an Israeli-American conspiracy) is buried within its premises…and the Synagogue is still plunged in its deep slumber. Is it destined to perish in oblivion?

Updates: Restoration and renovation of the Maghen Abraham Synagogue that began in May 2009 are nearing completion, with artists putting finishing touches to the interior of the building. To note that most of the surrounding historic buildings, including the Talmud-Torah Salim Tarrab School (jewish community center)were all demolished in the process of reconstructing the Wadi Abu Jamil jewish quarter ...