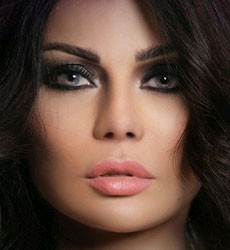 Haifa Wehbe Plastic Surgery Before and After Photos

Haifa Wehbe is a plastic surgery icon in the Middle East, and a pioneer in drastic physical transformations. She is often referred to as the Muse that inspires the industry in Lebanon and the Arab World (see Plastic Surgery Statistics).

This pop culture figure is also considered as the Sexiest Arab Woman of our Era.

Although she was beautiful from the start, Hayfa Wehbeh underwent numerous cosmetic interventions and reconstructive plastic surgeries.

We will attempt herein to study her transformations over the years, but not only on a physical level, as we will also try to appreciate the changes in her attitude in regards to plastic surgery.

Haifa comes from the south of Lebanon, a region known for its pretty girls and beauty queens (see Rima Fakih). At 16, she won her first local beauty contest.

Haifa was officially placed under the spot light in 1995, when she took part in the the Miss Lebanon Pageant. Her dark Arabian features and voluptuous body did not go by unnoticed. The public saw her again a few more times in music videos next to Arabic singers such as Georges Wassouf Assi El Halani, and Saber Al Roubai. Haifa had then already done a few cosmetic touch ups, but most of which were to be later revised.

In a TV interview, she announced to the public her future project of becoming a singer. She sang off key part of the song Sway (shaft- Mucho mambo was a big hit at that time). This was more like a warning, as less than a year later she set off her bomb video Agoul Ahwak! The Arab music industry was about to permanently change...

Actually, Haifa is known to constantly make further touch ups; her nose has changed many times, with the last rhinoplasty dating back to 2010. Refer to Haifa Wehbe Nose Job.
Haifa also removed her distinctive mole, and reduced her chest cup size, among other touch-ups...

To note that around 2008, Haifa was starting to age (like most humans) and candid photos of her were spread on the internet by her usual haters. Some went as far as saying 'her face was melting'. The perfectionist Haifa did not wait long before doing another face-lift in which her sagging facial muscles were reset in place.


Because it's a sensitive issue it is unclear which plastic surgeons worked on Haifa. However some point out to the famous Dr. Nader Saab, husband of Anabella Hilal.

As she matures, Haifa Wehbe's relationship to plastic surgery is notably changing. While cosmetic enhancements were originally seen as Taboo (She would often deny having done any of them in interviews), she gradually learned to accept her limits. This only exacerbated her charm and made her much more interesting actually. In her earlier photos she looked surprisingly a lot like Pamela Anderson, more recently she is often being compared to Megan Fox.

In one of her more recent music videos, Haifa Wehbe even makes fun of herself and her exaggerated recourse to plastic surgery as a magical solution to all her problems. She satirically mimics Brow lift and facelift surgeries in a quick hand gesture directed at her face, in a symbol of her eternal quest for beauty and youth.

Help us improve this page:   Correct or update the Haifa Wehbe Plastic Surgery Before and After Photos page