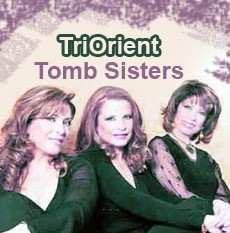 TriOrient or les sœurs Tomb (Tomb sisters) is a Lebanese Trio of singers composed of Ronza (Aida Tomb) a Soprano, Amal Tomb Abi Ghanem a Mezzo-soprano and Fadia Tomb El-Hage a Contralto. The father of the Tomb sisters was a famous painter and their mother had a beautiful voice, she studied singing at the Lebanese National Conservatoire and was a singer for sometime.

TriOrient is accompanied by their brother Samir Tomb on the piano.

In March of 2010, the Tomb sisters launched the fifth "Spring of Culture" Festival in Bahrain in the presence of Mai bint Mohammed Al Khalifa, the minster of Media and Culture in Bahrain.

The rich repertoire of TriOrient includes classical European pieces, old Arabic melodies and Christian Hymns. They even came up with a song where they imitate Derbakeh sounds using their mouths, a concept that was ripped-off by Najwa Karam in the song "Mafi Nom" (No more sleep), the first song in her 2011 Album released in the month of July 2011.

TriOrient are known to perform together especially around Christmas time. This is when they all reunite, as they also have their separate solo careers.

Help us improve this page:   Correct or update the TriOrient Tomb Sisters page