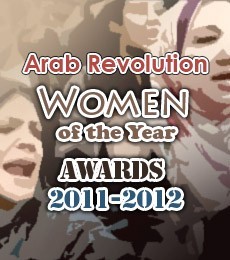 The Arab Revolution Woman of the Year Award was created to celebrate Woman Power in the Arab World, and recognize the motivation and drive that set apart some of the most inspirational Arab women freedom front-liners in the latest uprisings in the region (revolutions and counter revolutions); Names that have helped instigate a new model of home grown women leaders, born out of revolutionary struggle...

The Arab Woman of the Year 2011 title winner was determined based on various factors, including charisma, visibility, achievements,... with a priority given to socio-political activism.

Notice: Special care was taken to evaluate each eligible candidate, as best as possible. With the conflicting reports, lack of authentic and reliable information, misleading and sometimes even bluntly dishonest media coverages,.. it is extremely hard to determine the true inspirational models from 'Fabricated' sensationalized puppet heroes and heroines that were put under the spot light just to serve a certain purpose in the larger scheme. Forged Youtube videos, suspicious bloggers and 'activists', anonymous tweets taken as a source of information, mislabeled image footage,... the list of manipulation through propaganda and media conditioning is endless!

The Arab Spring has been without a doubt hijacked by the west, still we like to believe most if not all of these women were honest in their fight and did their best to better their nation, regardless of all the hidden agendas. Some are now facing a new fight against the "counter-revolution" that was set off in the region to deviate the Arab Spring from its original course or to recuperate the lost 'interests". For instance, although the Syrians deserve more freedom and a peaceful democratic transfer of power like the rest of us, sponsoring terrorist groups to ignite sectarian tensions like the west is doing (with their Arab allies) just to set scores with the Syrian regime and the resistance movement is far from being a legitimate action. Extremists barbarically slaughtering security forces like sheep are apparently considered as peaceful protesters by some? Suddenly the odd timing picked to end Osama Bin Laden's legend makes more sense. When compared to the insulting silence regarding the torture and harsh jail terms (even the death penalty) of Bahraini activists for merely expressing their political beliefs and organizing peaceful pro-reform rallies, the resulting double standards are beyond shocking! Similarly, France led the Neocolonial military intervention in oil-rich Libya, after it was paradoxically ready to send French riot police to help "restore order" and support the Ben Ali regime in Tunisia. The old plan to switch the Israeli-Arab conflict for a Sunni-Shiite, Persian-Arab or other sectarian/ethnic clashes in a 'creative chaos' is also evidently still in full action. After the failed previous attempts to shut off the remaining opposing voices, including with the Special Tribunal for Lebanon Masquerade and the Israeli aggression on Lebanon in 2006 then in Gaza, another wicked strategy is clearly underway. Not if determined Arab nationalists have something to say about it, of course.

Although Arab women took the leading roles in most of the democratic uprisings in the region, some are now being shoved aside, or worse, are faced with the classical sexist male chauvinistic attitude they have been victims of for such a long time. Apparently, the new officials that took power after Hosni Mubarak was ousted (military - MBH) decided to conduct “virginity tests” on some of the women who had taken part in the Egypt Protests next to other men in Tahrir Square! As it was explained, 'decent' women would not have spent their nights in a public square. A conspiracy against the Tunisian revolution is also unfolding with the questionable nature and composition of the Tunisian Reform Commission, not to mention the tragic states Libya and Yemen were left in...just to mention a few aberrations following the short lived victories...

The Arab Woman of the Year 2011 is Nawara Negm. She is the face of the Arab Revolutions, and represents genuine hope in a true reform of the Arab socio-political scene. Some see in her inspirational traits of perhaps the first Egyptian and Arab woman president in the near future!

Another inspirational Arab woman is Sihem Bensedrine, the "Iron Lady of the Tunisian opposition." She has and is still occupying the center stage in the political debate in Tunisia, securing women’s participation in the transition and making sure their voices are heard. She fought for a council that would rewrite the constitution and better harness all the forces that contributed to the Jasmine Revolution.

Journalist and human rights activist, Tawakkol Karman is widely considered to have started the movement in Yemen.

Assya El-Haj Salem is a leading figure in the fight against the " counter-revolution" in Tunisia. She is the symbol of the ongoing struggle there to achieve the objectives of the revolution.

Lamees Dhaif: At the forefront of the movement for change in Bahrain, Lamees has been for a decade an outspoken proponent of social justice. Though she has toned down her opposition in recent times, she is still one of the most visible figures there.

The charismatic Samar El Hajj has stood up against more than one world conspiracy in the past and is currently a visible female figure opposing the counter-revolution in the Levant. She has been previously credited for exposing the flaws of the Hariri Tribunal, standing against the Sunni-Shiite conspiracy in the region, and lobbying for the Gaza flotillas and is now the co-organizer of the Mariam Flotilla to Syria.

Asmaa Mahfouz, the young Egyptian activist that became popular because of her video blog, is also on our list. She is believed, among others, to have encouraged the mass gatherings through her Youtube video callings.

Souhayr Belhassen, head of the International Federation of Human Rights Leagues, has closely accompanied and supported all the revolutions in the region.

Heading the little mini-revolution in KSA, Manal al-Sharif is part of the Campaign against the male-only driving rules in the ultraconservative kingdom. Although this defiance could sound very derisory, it could very well encourage wider reforms and political freedoms in the near future...Hopefully this disobedience will lead to similar steps in other Gulf Kingdoms that need more political reforms, including Qatar, where officials need to walk their talk and stop giving pretentious lessons to others.

BUT the real heroines shall remain those unknown regular Arab women, mothers and sisters, who fought for change and risked their own lives and that of their loved ones. Sadly, some of them have left us, and others remain but with painful scars both physically and mentally. A special tribute therefore goes to all those women who constituted an active and influential entity in most protests and who were barbarically targeted as a revenge measure, like in the Bahrain Protests... We will place the spotlight on Ayat Al Qurmuzi, as a symbol of regular brave women.

Other inspiring senior women activists are thankfully still around to give us hope.

Djamila Bouhired is still an inspirational model in Algeria after all this time, and is seen as an emotional support to the youth asking for more reforms.

Saida Sadouni “the mother of the Tunisian revolution” did not think twice before draping the national flag around her shoulders and partaking in the Tunisia Protests. "I resisted French occupation. I resisted the dictatorships of Bourguiba and Ben Ali. I will not rest until our revolution meets its ends, for your sakes my sons and daughters, not for mine,..."

Dr. Nawal El Saadawi, the determined feminist who founded Global Solidarity for Secular Society and who has been working to liberate women for more than fifty years, is also still very active in her plight. Sadaawi wants the Egyptian Revolution to go much further. She strives for an Egyptian society where women are really free, with the underlying roots of misogyny broken apart and exposed to the light. She warns that whatever political system comes next into place, such sexist practices will be perpetuated unless men stop learning to demean, degrade, and be condescending to women.

Leader among Arab activists for democracy, human rights, and non-violent conflict resolution, the Lebanese activist and sociologist Ogarit Younan is fighting for a different type of revolution: the end of the sectarian system in Lebanon. She is guiding the youth find realistic and implementable steps towards the sought reforms.

Help us improve this page:   Correct or update the Arab Revolution Women of the Year Award page